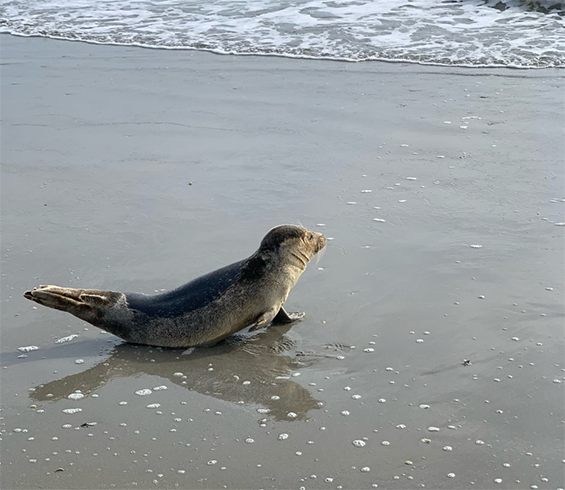 Liz Cartwright saw this seal while walking on Avalon’s beach last week.  Thanks for sharing, Liz!

RECORD TOURISM NUMBERS were achieved in Cape May County in September and October, according to an article in the Press of Atlantic City this past weekend.  After a stunning drop in occupancy tax revenue during the spring and early summer months, September figures were up by 17.3% and October figures were up by 6.5%.  Occupancy tax collections help measure overnight stays in hotels.  Vacation rentals in privately owned properties are not included, but those numbers have been widely reported to have been strong from July through October.

MARKET STATS:  The number of contracts written, and the number of closings, were both up in December 2020 compared to a year ago.  The number of active listings declined further, as the median sale price rose to $2,470,000.  For a detailed look at the market, see the latest Long & Foster Market Minute report below. 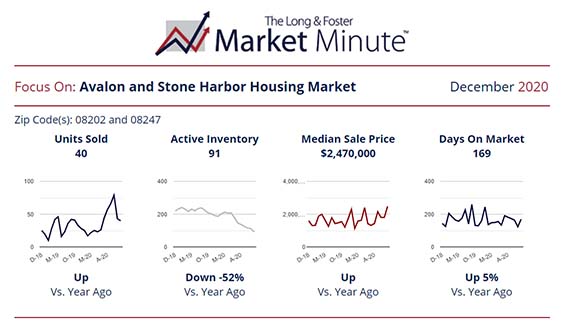 SEALS have made appearances on our beaches in recent weeks, to the delight of those that spot them while walking on the beach.  The Marine Mammal Stranding Center urges those who see the creatures not to approach too closely, as it could cause stress to the animals, because they may be seeking rest after a long journey.  Watch from a distance with binoculars, and take pictures with a telephoto lens.  If you post photos, the MMSC recommends not posting the animal’s location, to prevent crowds from forming.

STONE HARBOR BEACH REPORT:  Stone Harbor has released its annual report on the condition of its beaches.  Based on surveys completed in October, the 21-page report details the movement of sand since the replenishment effort that took place in 2017, and shows the profiles of numerous beaches year-by-year.  To view the beach report click here:  https://stoneharbornj.org/wp-content/uploads/2021/01/SH_2020_annual_report-on-BEACHES.pdf

THE CAPE MAY BUBBLE:  Ever heard the term?  It’s often used to describe weather patterns over Cape May County that differ from the rest of South Jersey (such as rain in Cape May County while the rest of South Jersey gets snow.)  Meteorologist Joe Martucci will host a Facebook Live presentation on February 6th at 10am titled The Cape May Bubble–Is It For Real?  Martucci says he’ll show us what’s fact, what’s fiction, and how the area’s meteorology works.  Find Joe Martucci’s event page here:  https://www.facebook.com/JoeMartWx/events/?ref=page_internal  (There’s a $3.99 fee to view the February 6th presentation.)

IT’S COLD NOW…but in four short months Memorial Day, and the rest of the summer season, will be just around the corner!  Whether you need to plan a week’s vacation, or arrange for a permanent stay here at the beach, now is the time!  Call or email me so we can get started.