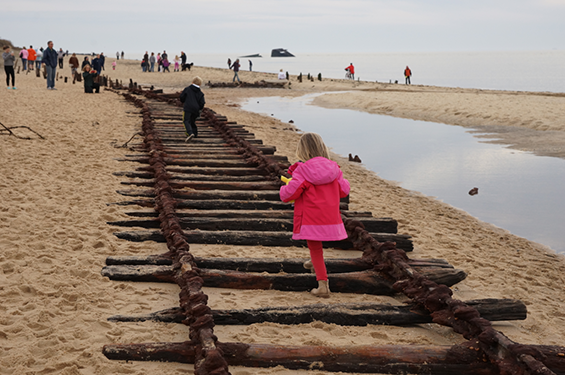 “Ghost tracks” are once again visible on Sunset Beach along Delaware Bay, as seen in this 2014 photo.  The Concrete Ship is visible in the background.  See below for more.

OUTDOOR DINING–HERE TO STAY?  Outdoor dining became a popular option during the pandemic, and many hope it’s here to stay.  Avalon is reviewing its outdoor dining guidelines with an eye toward improving them for the 2021 season.  Other beach towns are doing the same, hoping to help restaurants survive while retaining the popular option for patrons.

IN 2002, DUNE DRIVE underwent a major beautification project, with the addition of stamped concrete sidewalks, trees, and landscaping.  The former right of way was transformed from asphalt and concrete into an attractive, pedestrian friendly roadway with shade trees and colorful plantings.  Many of those original plantings are now in need of replacement, and the Borough of Avalon is planning to have the work substantially completed by Mother’s Day.  A presentation detailing the plans can be viewed here:  https://avalonboro.net/wp-content/uploads/2021/01/1.22.2021-Dune-Dr-Planting-Council-Presentation.pdf

“GHOST TRACKS” on Sunset Beach along Delaware Bay have returned.  Having once served a sand mining plant, the long-abandoned tracks have been buried under beach sand for decades but have recently reappeared after wind and tides shifted some of the sand that obscured them.  The tracks run parallel to the Bay, and saltwater and time have taken their toll, but they remain remarkably intact a hundred years after they were laid down.  In 2014 the tracks appeared for the first time in recent memory, and large crowds visited to have a look, as shown in the November 2014 photo above.  Shifting sands have covered and uncovered the tracks several times since then.  If you head to Cape May to visit the area, follow Sunset Boulevard to the parking lot at the Bay, then walk northward along the beach. 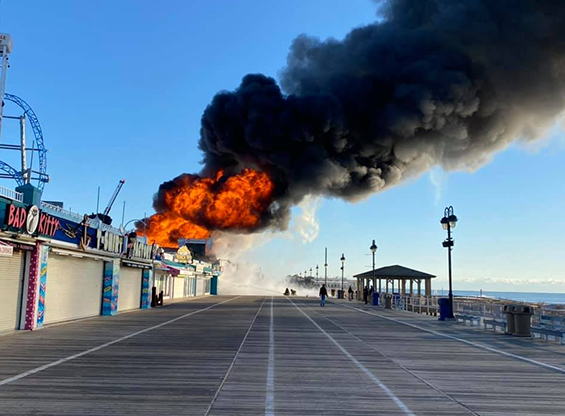 A MAJOR FIRE erupted early Sunday morning at Castaway Cove on the Ocean City Boardwalk.  The flames were fanned by strong winds, and black smoke rising over the ocean could be seen for miles around.  After several hours, the Ocean City Fire Department brought the blaze under control with assistance from surrounding fire companies.  Castaway Cove suffered severe damage to its office and arcade areas, but management has emphatically stated they’ll rebuild and be open for the 2021 season.

DID THE CAPE MAY BUBBLE affect our local snowfall earlier this week?  Find out February 6th at 10am as meteorologist Joe Martucci hosts a Facebook Live presentation on the subject.  Martucci will describe the meteorology of our local area and separate fact from fiction.  You can find the presentation on Facebook here:  https://fb.me/e/3hVMxl6kN  (There is a $5.99 fee for the event.)

THE WEATHER’S COLD, THE MARKET’S HOT!  It may be cold outside, but our real estate market is hot!  Ready to buy or sell?  Please call or email me!
New Listings: