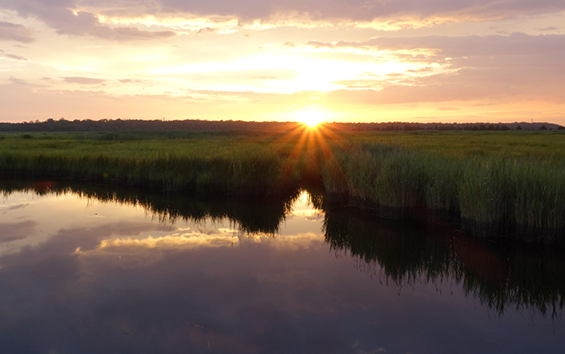 The last of the sun sinks over the wetlands on a summer day.

AVALON HARDWARE reopens Friday, and that’s a sure sign that spring is around the corner!  Whether you need batteries for your smoke detector, screws or other fasteners, or tools for larger jobs, it’s time to attack your spring to-do list!  In addition to Avalon Hardware, Seashore ACE on 96th Street is a convenient location on the island for all kinds of house- and hardware-related items.

BEACHSIDE SCIENCE is on the agenda this summer at Surfside Park in Avalon.  The Wetlands Institute will host five sessions this summer, broadly titled “Secrets of the Beach: Creatures Who Share Our Barrier Island.”  The free programs will be held on the third Wednesday of the month at 6pm, beginning May 19th.  Topics include seashells, shorebirds and migration, and diamondback terrapins.  More details to follow!

PHILADELPHIA TO AVALON: $3.80!  That was the 1958 one-way coach fare aboard the Pennsylvania-Reading Seashore Lines.  The fare to Stone Harbor was $3.59; Sea Isle City was $3.39.  The P-RSL was the result of the 1933 merger of the South Jersey operations of the Pennsylvania Railroad and the Reading Railroad.  Rail traffic to shore towns had already peaked by the time of the merger, and scheduled service continued to decline for decades.  In later years buses were used for the final connections to many destinations, as rail lines were pulled up.  In the early 1980s the last of the regularly scheduled passenger trains left Cape May County.

DR. PAUL OFFIT conducted an interesting Q&A session on the science behind the Covid vaccine, during Stone Harbor’s first edition of “Stone Harbor Connections.”  The hour-long session covered a broad array of topics centered around the virus, vaccine development and administration, post-vaccine immunity, and much more.  Watch the session here:  https://www.youtube.com/watch?app=desktop&v=FQYzDn6Gono&feature=youtu.be

ANOTHER SIGN OF SPRING: SHOP-A-HOLICS WEEKEND is on!  Visit your favorite participating stores for deals and discounts, Thursday, March 11th through Sunday, March 14th!  For a list of participating shops, click here:  https://visitavalonnj.com/node/2981

ICYMI: VILLA MARIA GARAGE SALE! This is the final weekend of the Villa Maria By the Sea garage sale.  The iconic Stone Harbor retreat will eventually be demolished to make way for a smaller, more modern retreat at the same location.  Stop by to find the perfect trinket or treasure from Villa Maria.  The garage sale runs from 9am to 3pm this Saturday & Sunday.