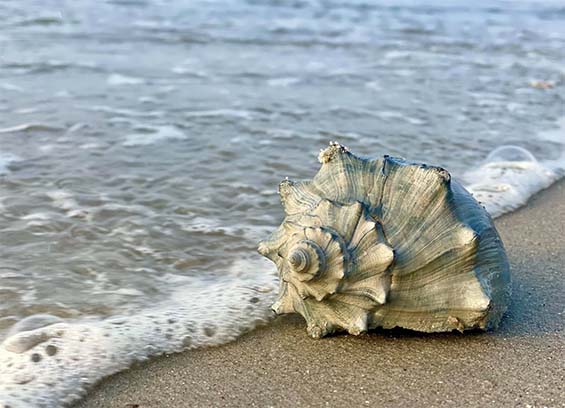 Such a simple composition, yet this photo says so much about the shore!  Nature, tranquility, the power of the ocean, the lure of the sand…Amy Jordan captured this beautiful image.  Thanks for sharing, Amy!

AVALON BOULEVARD BRIDGE WORK is scheduled to conclude on June 17th.  After two long off-seasons of alternating traffic, who isn’t ready for clear sailing across the bridge when entering or leaving Avalon?  The new concrete decking installed on the bridge has been grooved, striped, and sealed, and the asphalt approaches to the bridge have been repaved.

ANOTHER LOCAL BRIDGE, the Townsend’s Inlet Bridge, is a candidate for future replacement, according to a recent SeaIsleNews.com article.  The 81-year-old bridge has undergone extensive repairs in recent years, and numerous closures have occurred.   The Cape May County Bridge Commission has a plan for its eventual replacement, the cost estimates for which range from $65 million to $167 million.  A projected timeline puts the earliest possible date of a new bridge opening in 2029, and funding is far from certain.  Read the article here: https://seaislenews.com/plan-new-townsends-inlet-bridge-begin/

THE US COAST GUARD rescued six people from a pleasure vessel that began taking on water in rough weather 34 miles from Atlantic City earlier this week.  A Coast Guard MH-65 Dolphin helicopter hoisted two persons aboard, while a nearby Good Samaritan brought four others aboard their vessel.  The Coast Guard maintains helicopters and rescue vessels of various sizes at numerous points along the coast, including Atlantic City, Ocean City, Sea Isle City, and Cape May.

GIVE ‘EM A BRAKE!  Turtle season is in full swing, and they can frequently be seen crossing local roadways.  Slow down to avoid them, as they seek higher ground to lay eggs.  If you’re inclined to help them, first assure your own safety, and then cross the turtle in the direction it was headed.  For those turtles not fortunate enough to make it across the road, local “turtle patrols” frequently stop to harvest and incubate turtle eggs.

ANOTHER FAVORITE SEA CREATURE needs our help, too.  It’s dolphin calving season, and the best thing we can do is give them extra space while boating according to the Marine Mammal Stranding Center.  Young dolphins cannot swim as quickly as adult dolphins and may be struck or injured by nearby boats or jet skis.  Slow down on the water and give them a little extra room for safety.

SUNDAYS AT SURFSIDE!  The summer concert series kicks off June 27th at 7pm with Jimmy and the Parrots.  Bring a beach chair or blanket and enjoy some music along the beach!  Stone Harbor’s Tuesdays at the Tower concert series will kick off July 6th.

THIS SUMMER IS EXPECTED TO BE A GREAT ONE!  Beach tag sales are strong, restaurants have been busy, vacation rentals are up, real estate sales are booming–everyone is anxious to enjoy summer at the shore as restrictions ease and things return to normal.  Make it great for your family!  Take that vacation, try that new restaurant, book that whale watching trip!  Take advantage of everything that “summer at the shore” has to offer!