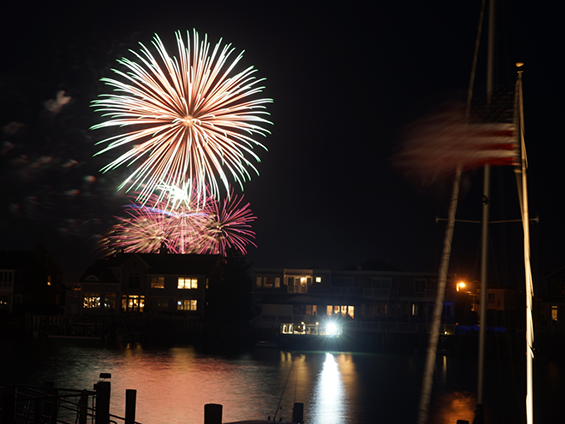 Old Glory waved over the bay as fireworks were launched from a barge off the beach Sunday evening.

WHAT A WEEKEND!  Even a questionable weather forecast couldn’t keep the crowds away!  By all accounts, Seven Mile Island was packed over the holiday weekend, with local business owners declaring the weekend a success.  Grey skies eventually gave way to sunshine and seabreezes, which kept the crowd here on the island through the whole three-day weekend.  Sunday evening fireworks displays in both Avalon and Stone Harbor were enjoyed from vantage points all over the island!

SOMETIMES IT’S EASIER to let someone else worry about it…If you’re looking for the ultimate in stress-free vacationing, why not let the Beach Setup Guy take care of hauling your beach chairs to the sand and setting them up for you?  While you’re at it, you can schedule dog walking services with Surf Dog Walking–meaning you’re free to go to the beach while Rover gets his exercise elsewhere!  Check them out at www.BeachSetupGuy.com and www.SurfDogWalking.com.

UNEXPECTED SHOALING has occurred in Avalon’s Pennsylvania Harbor near the end of 21st Street.  The Borough of Avalon will take steps to perform emergency dredging in the area.  Meanwhile boaters should be aware of the shoaling and use caution in the area.

GOTTA DO IT:  LOCAL BREWERIES!  A number of local craft beer makers operate in Cape May County and produce a variety of award-winning beers.  Whether you prefer to taste different brews at each brewery, or take some home to enjoy later, here are some local favorites:

REMINDER: STONE HARBOR TRASH & RECYCLING collection is still once per week, instead of the usual twice per week in the summer, due to a labor shortage.  A trash & recycling drop off point is located between 80th Street & 81st Streets in the Municipal Marina parking lot on Saturdays from 8am to 4pm.   Stone Harbor rental property owners: make sure you have enough trash & recycling containers to last a week–or purchase more if you don’t.

PSA:  SLOW DOWN, IT’S CROWDED!  Yes, it’s that time of year when the beaches, sidewalks, streets, and parking lots are full of people.  For everyone’s sake, slow down, especially if you’re behind the wheel of an automobile.  Allow a few extra minutes when travelling around the island.  Better yet, roll down the windows and enjoy the salt air during your ride!