MARKET STATS: 13 sales occurred during the month of June, limited by tight inventory, while the median sale price jumped to $2,875,000.  For a detailed look at the market see the latest Long & Foster Market Minute Report, below. 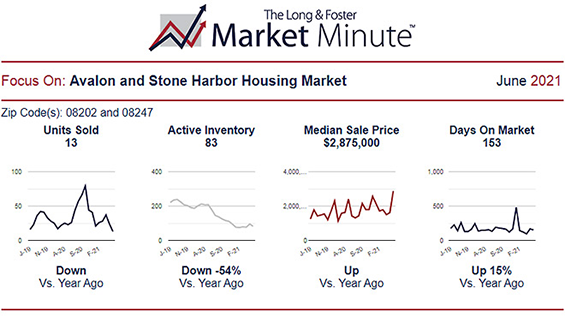 AVALON NOW OFFERS LIVE STREAMING of its Borough Council meetings via Zoom.  Avalon previously used a telephone call-in system allowing remote users to listen to council meetings, but no video feed was available.  The new Zoom system was set up in response to numerous requests, and last week’s meeting was the first to be broadcast; recorded videos of council meetings will be posted to the Borough website.

EMERGENCY DREDGING OF PRINCETON HARBOR was approved by Avalon Borough Council in response to shoaling at the westerly end of the harbor near the end of 21st Street, making navigation difficult.  A $158,750 contract awarded to Trident Marine Piling of Longport calls for the removal of approximately 1,150 cubic yards of hard sand that has accumulated in the waterway.  Actual dredging is expected to begin this week.

IT’S A BIRD…IT’S A PLANE?  A banner plane made an emergency landing on the Route 52 Causeway just outside Ocean City after engine trouble occurred.  Upon first experiencing the trouble the pilot jettisoned the banner and headed for the Ocean City Airport, but upon seeing a break in summer traffic on the westbound causeway, the 18-year-old pilot brought the aircraft down for a safe emergency landing, with no injuries and no damage to the aircraft.  Needless to say, the sight of an airplane parked on the roadway caused quite a stir!

GOTTA DO IT: FRESH LOCAL SEAFOOD!  Nothing says “seashore” better than locally caught seafood freshly prepared for dinner!  Unless you’ve caught your own “catch of the day,” a visit to a local seafood store is the next best thing.  Whether you want to pick crabs, grill a tuna steak, bake flounder filets stuffed with crab meat, or steam some clams,  there are many local options.  Here are some recommendations:

SANTA WILL BE IN STONE HARBOR THIS WEEKEND, taking a break from the North Pole.  Beginning Thursday, July 22nd, Santa will make nearly two dozen appearances at local restaurants, shops, and events.  Keep an eye out for the Big Guy.  For the first time ever, t-shirts commemorating his Stone Harbor vacation will be available for $20 at the Stone Harbor Welcome Center at 212 96th Street, while supplies last.

STONE HARBOR FESTIVAL OF LIGHTS BOAT PARADE!  Save Saturday night for some fun on the water, as Stone Harbor’s Festival of Lights Boat Parade kicks off at 8pm.  Lighted, decorated boats will depart the Stone Harbor Yacht Club heading for Stone Harbor’s southernmost waterfront, then parade northward through all basins, concluding at the 81st Street Municipal Marina.  Boats will feature a variety of lights, costumes, decorations, music, and dancing; docks decorated with lights and music are expected along the way.  Even if you can’t get out on the water to participate in the parade, you can watch it from any street-end bulkhead or take in a panoramic view of the bay and all parading boats at the Festival of Lights Viewing Party at the 81st Street Municipal Marina, while enjoying food trucks, music, and a wine & beer garden.  Bring your own chairs–the Viewing Party runs from 6:30pm to 9:30pm!