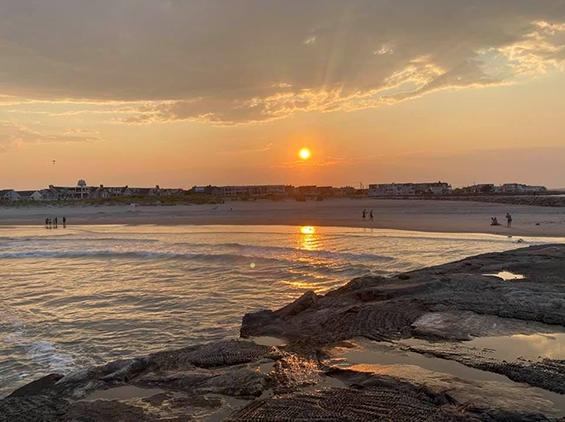 Ken Rothweiler captured this beautiful sunset from Avalon’s 8th Street jetty.  Thanks for sharing, Ken!  For more on the 8th Street jetty, and other unique locations, see below.

A SALUTE TO THOSE WHO SERVE: The Atlantic City Airshow returns on Wednesday, August 18th after a hiatus last year.  This year’s lineup includes the United State Air Force Thunderbirds flying F-16 Fighting Falcons, as well as the USAF F-22 Raptor Demonstration Team.  Other favorites include the P-51 Mustang, the US Army Golden Knights parachute team, and a US Coast Guard Search and Rescue Demonstration.  The air show is free; check out show info here: https://airshow.acchamber.com/

If you’re thinking of selling, it may be a great time to do so.  Take advantage of limited inventory, low rates, and strong purchase demand.  Call me and let’s talk!

OTTERS SEEN ‘ROUND THE ISLAND!  Otters have recently been seen in the back bay waters, having made several appearances near docks and bulkheads.  Otters appear from time to time as they seek shellfish for food, which they capture with their claws.  More than one clever otter has been known to open floating bait buckets that fishermen use to store live bait–much to the surprise of the fishermen, who find them empty after the otters leave!

GOTTA DO IT: UNIQUE LOCATIONS!  We all love the beach, but sometimes it’s fun to see things from a different perspective.  Here are some interesting and beautiful island locations to check out!

WHAT’S LEFT ON YOUR SUMMER BUCKET LIST?  The prime weeks of summer are here–time to make sure you check off items on your Summer Bucket List!