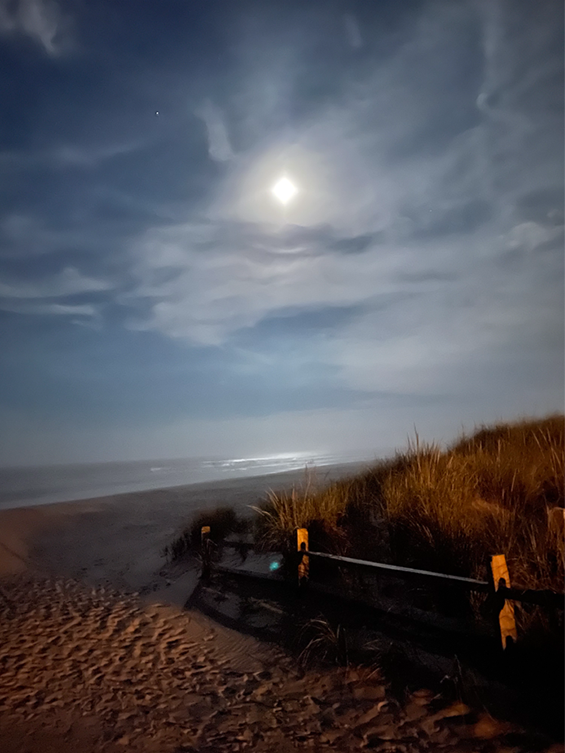 15-year-old Braeden Kelly took this beautiful photo of an almost-full moon over the 84th Street beach on the evening of August 20th.  Great shot, Braeden!

MARKET STATS: The median sale price inched up to $1,453,000 in July, up from $1,312,500 from last year.  While the number of July sales exceeded those in June, both months were down slightly compared to last year, held back by low inventory levels.  In the past month or two, the number of active listings has ticked up slightly, after a long decline.  For a detailed look at the market see the latest Long & Foster Market Minute below.

AVALON RESCUE SQUAD will host the JeffSTAT 4 helicopter on Monday, August 30th at 5pm, which will be available for public viewing at the Avalon Elementary School.  JeffSTAT 4 is one of four helicopters available to transport critically ill or injured patients in South Jersey or Pennsylvania and is stationed at Woodbine Airport.  With a typical airspeed of 120 knots (138mph), it can be in Avalon four minutes after takeoff, or in Cape May in eight minutes.  JeffSTAT 4 is making the visit to Avalon at the request of the Avalon Rescue Squad.

A MILLION DOLLAR FISH!  Actually, the heaviest blue marlin caught in this year’s MidAtlantic Tournament was worth more–$1,167,762 to be precise.  The 1,135-pound blue marlin was caught aboard the 63′ “Billfisher” on the fifth and final day of this year’s tournament, beating a 958-pound blue marlin that had been caught earlier in the week.  The heaviest white marlin weighed 82-pounds, winning the crew of “Sea Wolf” $1,001,335 in prize money.  More than 200 boats from all over the east coast competed in this year’s MidAtlantic, celebrating the 30th Anniversary of the event, which is hosted in both Cape May, NJ and Ocean City, MD.

AIRFEST 2021 takes place over Labor Day Weekend, September 3rd-6th, at the Naval Air Station Wildwood Museum at Cape May Airport.  The event runs 10am to 4pm each day and includes aircraft fly-ins, static aircraft displays, a US Army UH-60 Lifesaving demo, classic car displays, food, and a beer garden.  Regular admission for adults is $14, and children are $10.  Click here for more info: https://usnasw.org/events-2/

PLAN AHEAD–DUNE GRASS PLANTING: Pencil in a few hours the morning of Saturday, October 23rd to plant dune grass in Avalon along with other volunteers.  After a brief instructional meeting at 8:30am at Community Hall, volunteers will plant sprigs of dune grass using provided tools.  A light lunch will follow.  Dune grass is essential to a healthy dune system, as its roots help stabilize the sand, providing storm protection to the island.   Save the date and watch for an update as we get closer to the event!

PERHAPS THE BEST PART OF OWNING A SHORE HOME is not having to go home at the end of the summer!  If you love Avalon & Stone Harbor, why not make it permanent?  Whether you want a small condo for getaways or a huge beachfront mansion, we’ve got something for you!  Call or email me today!