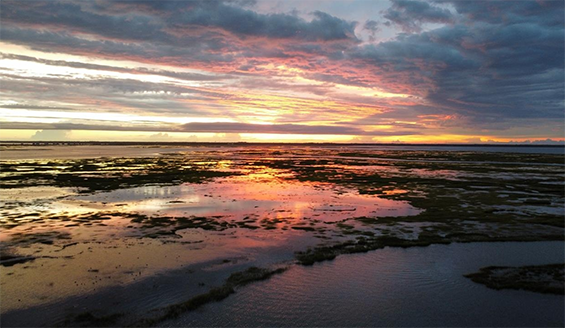 Cloudy skies and a high tide made for dramatic reflections in our back bay waters last week.  Scott Zimmerman captured this great shot behind Seven Mile Island.  Thanks Scott!

OVER 50 LIFEGUARDS from across the state came to Cape May last Friday to guard the beaches, so Cape May lifeguards could attend the funeral of 16-year old lifeguard Norman Inferrera, who died during an on-duty accident.  Inferrera was seriously injured when a rogue wave broke and capsized his boat, and later succumbed to his injuries.  The Cape May Beach Patrol later reached out to more than 20 beach patrols for assistance covering the beaches during Inferrera’s funeral and were overwhelmed with rapid responses from Cape May Point to North Jersey.  According to a recent Atlantic City Press article, Avalon Beach Patrol Lieutenant Erich Wolf was among those who volunteered at Cape May, and even manned Inferrera’s lifeguard stand.

Lifeguards from across New Jersey guarded Cape May’s beaches last Friday, so Cape May Lifeguards could attend the funeral of one of their own.  Photo by Richard Demers/Facebook.

THE GREATEST THING ABOUT EVERY SINGLE JERSEY SHORE TOWN!  That was the title of a recent NJ.com article which listed highlights from towns up and down the coast.  Curious what the article listed?  Here are a few of them:

9/11 CEREMONIES will be held in Avalon and Stone Harbor, commemorating the 20th Anniversary of the event.  Avalon’s ceremony will take place September 11th at 9am at the memorial at 21st Street and Dune Drive.  Former Congressman Frank Lobiondo will be the guest speaker, and Miss New Jersey, Alyssa Sullivan, will sing the National Anthem.  Stone Harbor will host a 9/11 Memorial Run at 8:46am on September 11th (the time the first tower was struck).  Registration will close at 8:30am to ensure all runners are ready.  Sign up information can be found here: https://runsignup.com/Race/NJ/StoneHarbor/StoneHarborAvalon911Memorial5K  After the run the fire department will host a memorial ceremony at Freedom Park at 10:30am.

MOSTLY SUNNY, HIGHS IN THE 70S: That’s the forecast for the three-day holiday weekend!  After the remnants of Ida finish dropping rain this week, skies are expected to clear up.  Hopefully the forecast will hold so we can all squeeze in some extra beach days and family barbeques!

IT’S NOT OVER!  Although Labor Day Weekend traditionally marks the end of summer and the return to the school year, those lucky enough to be able to stay on the island during September and October call it the “Second Summer.”  Warm days, cool nights, and smaller crowds are among the highlights to be enjoyed!