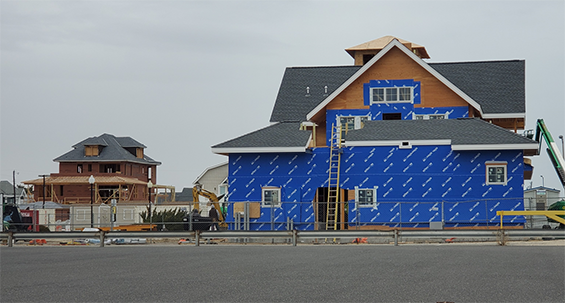 The new Stone Harbor lifeguard headquarters is currently under construction; behind it, about a block north, is the Pebbles Guest House, which is undergoing a major renovation.

A LOBSTER HOUSE CLAM APPETIZER yielded a pearl for Michael and Maria Spressler, who were dining at the restaurant earlier this month.  While enjoying clams on the half shell, Michael discovered a pearl in his last clam!  According to a CBS-3 report, the Spresslers first visited the Lobster House 35 years ago, in February 1987.  Watch the report here:  https://philadelphia.cbslocal.com/2022/02/28/new-jersey-couple-pearl-the-lobster-house-cape-may/

ELECTRIC OUTAGES in Southern New Jersey fell to their lowest level ever in 2021, according to a recent Cape May County Herald article.  Atlantic City Electric has recently invested in new infrastructure to increase capacity and improve reliability, especially during adverse weather.  Newly installed utility poles are a visible sign of this investment, but other improvements include substations, switches, and cabling.  Read the article here: https://www.capemaycountyherald.com/news/fewest-outages-ever-for-ac-electric-customers/article_5ce9cd4c-958f-11ec-b471-bb784686994d.html

80 YEARS AGO THIS WEEK, US Navy Destroyer Jacob Jones (DD-130) was torpedoed and sunk by a German submarine off the Southern New Jersey coast, during World War II.  The Jacob Jones had been patrolling southward from New York, and the day before her sinking had picked up survivors off Barnegat from the wreckage of the R.P. Resor, a tanker that had also been torpedoed, and later sank.  The sinkings, along with others, led to the rapid construction of 15 lookout towers along the coast from North Wildwood to Bethany Beach, Delaware, including one that still stands on Sunset Boulevard in Cape May, overlooking the Delaware Bay.  The towers were built to keep watch over the entrance to Delaware Bay, and help guide shore-based artillery, in order to protect shipping on the Delaware River.  The lookout tower on Sunset Boulevard is open for tours during the summer.

WIND FARM AUCTION:  Last week the federal government announced a $4.37 billion sale of offshore wind leases for six locations off the coast of New Jersey and New York.  The sites, totaling 488,000 acres, are expected to eventually produce 7 gigawatts of energy, powering 2 million homes.  The Orsted’s Ocean Wind 1 project off the coast of Southern New Jersey is the state’s first offshore windfarm project, and could be operational by the end of 2024.  Orsted’s Ocean Wind 2 project site is adjacent to Ocean Wind 1, and together the projects could generate 2,200 megawatts.

STONE HARBOR BOULEVARD will undergo repaving now through March 9th.  The entire width of the roadway will be resurfaced, from east of Bayberry Drive to the foot of the 96th Street Bridge.  Expect alternating lanes of traffic, and lane shifts, during the paving work.

SIGNS OF SPRING:  It’s March, and although we still have a few cold weeks left, there are encouraging signs of spring everywhere!  Here are just a few:  Avalon Hardware has reopened; Stone Harbor’s Wawa has reopened after its renovation; the Concord reopens this week.  Look for more signs of spring in the coming weeks!

WATCHA NEED?  If you need a contractor, plumber, or landscaper, or a restaurant suggestion, or just want to talk about the market, please email or call me anytime!
New Listings: