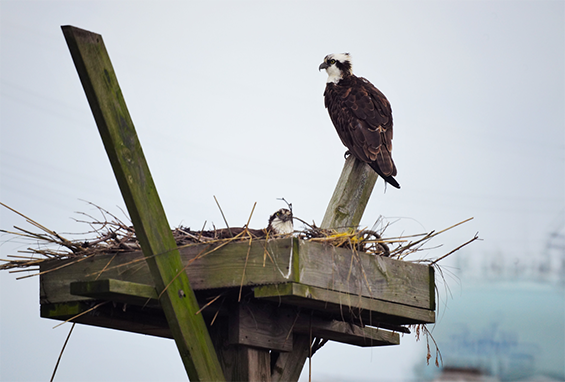 Ospreys are moving back into the area, another sure sign that Spring is just around the corner!

MORE SIGNS OF SPRING!  In addition to an extra hour of daylight at the end of each day, another great sign of spring has appeared: Ospreys have returned to the area, and are taking up residence in many of the man-made nesting locatoins throughout the area.  Ospreys typically return to the same nesting areas year after year, so if you have a favorite pair of ospreys from last summer, check to see if they’re back in the same nest this year!

THE STONE HARBOR SHHHIVER POLAR PLUNGE takes place this weekend, along with the Pre-Shiver party at Stone Harbor Yacht Club Friday evening, Kegs & Eggs at Fred’s Tavern Saturday morning, the 12pm Shiver Parade to toward the beach, a dip in the water about 1:15pm, and a post-party at Fred’s afterward.  For details use the QR code below.  By the way, even though it’s starting to feel like spring in many ways, the ocean water temperature is still a bone chilling 41 degrees!

STONE HARBOR BOULEVARD PAVING continued this past week, and the new road surface will soon be ready for traffic.  Meanwhile, there is discussion of reducing the speed limit along the road from its current 50mph maximum to 35mph.  Cape May County has the final say over the roadway’s speed limit, but Middle Township’s Committee passed a resolution last week in support of the speed reduction.

AVALON’S SAND BACKPASSING PROJECT won’t be performed in-house by public works employees using rented heavy equipment, according to the Cape May County Herald.  Borough Administrator Scott Wahl indicated that supply chain issues have left the rental equipment unavailable.  Instead, the borough will seek a private contractor to handle the sand movement from a borrow area near 35th Street to north-end beaches in need of replenishment.

PLAN AHEAD FOR DUNE GRASS PLANTING in Avalon!  Volunteers will plant dune grass on Saturday, April 23rd. Anyone who wishes to volunteer may call Sue Keen at 609-967-5924 or Community Hall at 609-967-3066, to sign-up. Volunteers will meet at Community Hall, 30th and Avalon Avenue, at 8:30 a.m. There will be a bagged light lunch provided at the end of the planting. The rain date is Sunday, April 24th.  The roots of newly planted dune grass eventually help to strengthen and stabilize the dunes, providing protection to the island during storms.

CLEANING SERVICES, LANDSCAPERS, AND OTHER CONTRACTORS should be scheduled early this year.  While planning ahead is always helpful, it’s even more important this year as many service providers are still experiencing difficulty finding workers.  If you haven’t already begun your search for service providers, start now!  If you need recommendations, please email or call me.

HAPPY SAINT PATRICK’S DAY!  May the Luck ‘O The Irish be with you!
New Listings: