Captain Joe Trainor guides the 55-foot “Low Profile” out of Avalon Marine Center during the early morning hours, on his way offshore.  The early morning fog is common in late summer, caused by warm, humid air over cooler ocean and bay water.  See below for offshore fishing charter options.  Photo by Paul Leiser, Jr.
THE BACK BAYS have been alive with marine life in recent weeks.  Otters have been seen many times.  Dolphins have made multiple appearances.  Turtles are regular visitors, and usually return to the same areas.  Recently, numerous sand sharks–harmless to swimmers–have been seen around bulkheads and docks.  Soon, schools of snapper blues will appear, chasing minnows and other bait fish.  Along with the usual assortment of ospreys, egrets, and other shore birds, it’s a wonderful display of nature’s creatures.  For the best viewing opportunities, pick a high tide in the early morning hours or just before sunset, when things are quieter, and visit any of the numerous bayfront piers on the island, or any of the streets that end at the bay.
HOW’S YOUR SUMMER BUCKET LIST?  Don’t have one?  Make one, then make time to check off the items on your list!  While we still have several great weeks of summer left, they roll by quickly.  Identify a few favorite summer activities, or perhaps a couple of new ones to try, then make time to enjoy them!  By the way, if acquiring your very own shore property is on your Summer Bucket List, let’s talk! 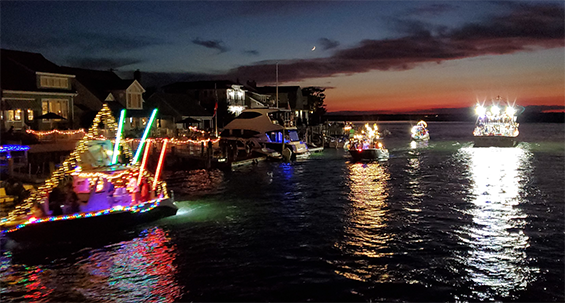 Decorated boats paraded through Stone Harbor’s back bay last Saturday during the Festival of Lights parade.  Many bayfront homes were decorated as well.
GET OUT ON THE WATER: OFFSHORE FISHING!  There’s nothing like it–being out on the open ocean, miles from land, as a big fish strikes, putting a deep bend in your heavy-duty fishing rod, as line peels off the screaming reel!  From tuna, to marlin, to swordfish, New Jersey’s offshore waters have numerous fishing hot spots.  Experienced charter captains and their crews ply these waters daily, and know how to find–and catch–the big ones.  Here are some charters to check out:
CONGRATULATIONS TO AVALON BEACH PATROL!  The Avalon Beach Patrol has captured the Dutch Hoffman Memorial Lifeguard Championship, snatching victory from two-time defender Longport.  Avalon has won all the competitions it has entered this season, including the Cape May County Championships and the David J. Kerr Memorial Races.  Congratulations, Avalon BP!
STONE HARBOR TRASH COLLECTION REMINDER: Property owners and guests in Stone Harbor should be aware that while the borough’s “concierge” collection continues, trash crews will not enter fenced yards with pools or pets in order to collect trash and recycling cans.  Cans must be placed outside those areas for collection to occur, and will be returned to the area where they were placed.  Stone Harbor’s Solid Waste Convenience Center is open for your convenience seven days per week, at the Municipal Marina at 81st Street & the bay.
RESERVE YOUR WEEK FOR NEXT YEAR!  If you enjoyed your Avalon/Stone Harbor vacation this year, reserve next year’s week now!  Call or email me so we can book your reservation!
UPCOMING EVENTS:
EVERY SUNDAY: