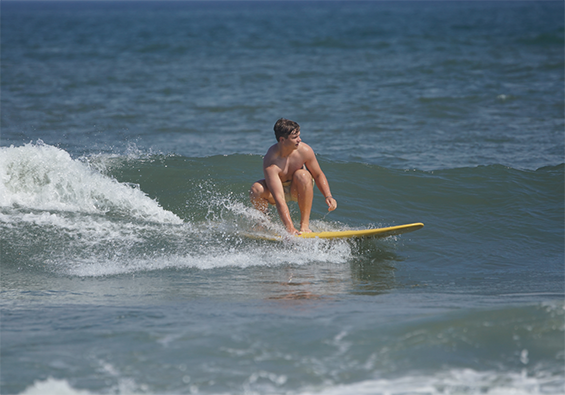 Catching a wave on a summer day!
“IT’S A SWEET, SWEET LIFE, LIVIN’ BY THE SALTY SEA.”  –Jimmy Buffet, with the Zac Brown Band, singing “Knee Deep (In the Water Somewhere).”  We agree with Jimmy!  Whether you visited Avalon & Stone Harbor for a weekend, a week, or you were here all summer, hopefully you’ve had a chance to enjoy our “sweet, sweet life, livin’ by the salty sea!”
DR. ERIC GREENSMITH retired from his medical career earlier this year, according to a recent Wall Street Journal article.  And then, he applied for a position on the Sea Isle City Beach Patrol, a summer job that he first held in the 1970s!  At age 67, Dr. Greensmith passed the qualifying tests, including a half-mile run and 500-meter swim, and has been guarding Sea Isle City beaches again since July—50 years after he first started guarding them.  Perhaps biking to his lifeguard stand on the beach—18 miles round trip, daily—has helped him stay young! The Wall Street Journal article is here: https://www.wsj.com/articles/retirement-lifeguard-jersey-shore-11661521079
MORTGAGE RATE “REALITY CHECK!”  Mortgage rates have increased somewhat from their recent historic lows, but a “reality check” provided by Prosperity Mortgage really helps put things in perspective.  Take a look at the figures below:
2022: 5.65%
2000: 8.05%
1990: 10.13%
1985: 12.43%
1981: 16.63%
1974: 9.19%
5.65% looks pretty darned good compared to historical rates!  Source: Prosperity Home Mortgage / the mortgagereports.com 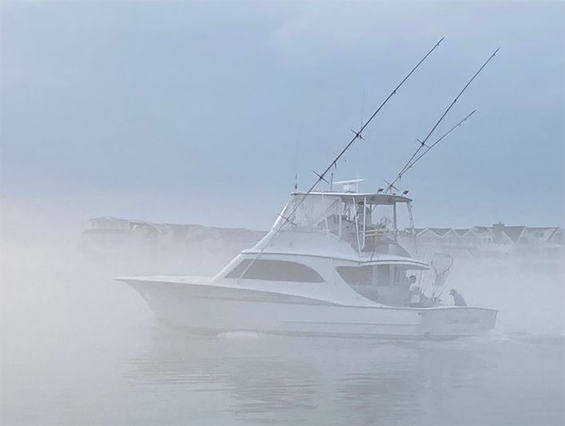 Remember this photo of Captain Joe Trainor’s “Low Profile,” departing Avalon Marine Center in the fog, that we featured several weeks back?  Let’s just say that Joe really knows how to catch fish—big fish!  See the “MidAtlantic Tournament” paragraph below for more about Joe’s latest catch.  Low Profile photo by Paul Leiser, Jr.
THE MIDATLANTIC TOURNAMENT: Every year the East Coast’s most dedicated sportfishing captains gather to do battle in the annual offshore fishing tournament, which took place from August 20th through 25th.  This year was no different, as over five hundred fish were caught.  Most were released, but the heaviest  were weighed in to determine the winners.  Captain Joe Trainor and angler Ken Wibble aboard the Low Profile caught this year’s heaviest blue marlin, a 657lb., 122″ beast.  Among the many other winners were Michael Jordan—yes, that Michael Jordan—who caught the second heaviest white marlin at 73lbs. aboard his boat, Catch 23.  Hundreds of boats competed this year, fishing out of both Cape May, NJ, and Ocean City, MD.
“EVERY WEEK” activities are winding down as the busy summer season draws to a close, but new weekend activities are appearing on the calendar now.  One of them is the annual AirFest at the Naval Air Station Wildwood Museum, which takes place this weekend.  Savor September Weekend rolls around in a few weeks, along with the Transportation Heritage Festival.  Watch our Upcoming Events list for more great weekend activities!
UPCOMING EVENTS:
New Listings: