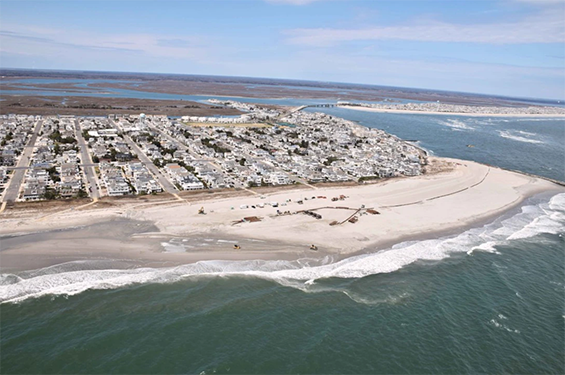 $28 MILLION BEACH REPLENISHMENT CONTRACT AWARDED:  The US Army Corps of Engineers awarded a $28.8 million contract for the replenishment of Avalon and Stone Harbor beaches.  Sand will be borrowed from Townsends Inlet and pumped onto the beaches, and then graded to match the dune and beach profile.  In Avalon, 231,000 cubic yards of new sand will be placed from 9th Street to 18th Street; in Stone Harbor, 464,000 cubic yards of sand will be placed from 90th Street to 123rd Street.  Options for additional sand exist in both towns.  Work is expected to begin in late February or early March; look for equipment to be mobilized before work begins.  65% of the project’s cost will be covered by the federal government, 26% by the state, and 9% by the municipalities.  In addition to more room on the beach for recreational use, the wider beaches, along with the dune system, are critical for providing storm protection for the island in the event of significant storms.

SEVEN DECEASED WHALES found along New Jersey beaches in the past month, including one in Strathmere, two in Atlantic City, and one in Brigantine, have lead to questions about why so many have died in such a short period of time.  According to the Marine Mammal Stranding Center, there have been an average of seven whale strandings annually in New Jersey, so seven in a month is highly unusual.  Pre-mortem vessel strikes are to blame for at least some of the recent deaths, MMSC has said, but further investitation is needed.

SKATING, ANYONE?  Strap on your ice skates and head to Icona Avalon’s Ice Skating Rink!  It’s open Friday’s through Sundays, through March.  Parents can grab a seat on the couches around the synthetic ice rink to watch the kids, or after the skating, head to the Veranda or Avalon Brew Pub to enjoy the full menu plus seasonal additions!  A daily pass with skates is $25.

NO EARTHQUAKE, JUST AN AIRPLANE:  Last Friday afternoon a persistent shaking of buildings felt throughout Cape May County lasted about 10 seconds, and had most people thinking “earthquake.”  No seismic activity was recorded, however, and on Saturday, the US Navy said it was likely one of their aircraft going supersonic that caused the rumbling.  Supersonic flight is prohibited over land, but the Navy often flies at supersonic speeds over the ocean.  Sonic booms are typically not heard (or felt) onshore, but in the wintertime, conditions can allow for the rumbling to travel back to land.
UPCOMING EVENTS: